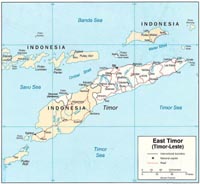 More than 100,000 residents of Dili have fled their homes to escape the violence, an aid official said.

Australia, which has provided the vast bulk of the more than 2,000 international security forces sent to secure control of the city, suggested a semi-permanent contingent may be needed in the country to get it back on its feet.

After a lull in violence on Tuesday, street fights broke out in several parts of the smoldering city on Wednesday. Roaming bands of youths fired sling shots, threw rocks, and hacked into rivals with machetes.

Australian forces spent several tense hours on the main airport road trying unsuccessfully to keep the warring parties apart. Some patrols rolled past scenes of violence and arson without intervening, the AP reports.

One man was treated by Australian army medics at the scene after being struck by a machete on the head and back. At least eight people were taken to the hospital with machete wounds, three in critical condition, a hospital official said.

More than 100,000 people have fled their homes, said Kym Smithies, a spokeswoman for some 30 private aid groups operating in the country. More than 70,000 were in camps in the capital and 30,000 others had fled the city altogether, she said.

Australia has 1,300 front-line troops in East Timor and several hundred military personnel supporting them. New Zealand's contingent of almost 200 troops began arriving in force Wednesday, deploying from military cargo planes carrying packs and rifles. More than 330 Malaysian troops are in place. Some 120 Portuguese paramilitaries are due by week's end.

President Xanana Gusmao said late Tuesday he had invoked emergency powers and taken over the government's security role to try to end a political deadlock that has contributed to the rampant lawlessness.

Foreign troops appeared to be flexing newly given powers to detain suspects, not just disarm them, and parts of the city appeared calm on Wednesday.

Australian troops arrested 10 suspects in one burnt-out neighborhood. Within eyesight of the troops, houses were broken into and set ablaze.

Brig. Mick Slater, the Australian commander in Dili, told reporters on Wednesday his troops had not fired a shot since arriving, though they released tear gas from a helicopter on Tuesday to disperse a gang.