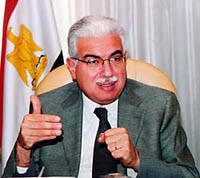 "No one is beaten up unless he is using violence himself," Nazif told the independent newspaper Al-Masri el-Youm in an interview. "When someone hurls a stone (at police), he shouldn't complain afterward and say 'they beat me up'."

The government has come under international criticism for using baton-charges to break up pro-reform demonstrations held in central Cairo on three Thursdays this month. Plainclothes and uniformed police were photographed beating protesters with sticks and dragging them along the ground. Hundreds of demonstrators were arrested, the AP reports.

"Of course, I am upset by the (police) violence, and I am not angry with the demonstration itself _ it is the people's right to express their opinion," Nazif said in the interview which took place Sunday.

But, he added, "when the Interior Ministry issues a warning that there should be no demonstrations today, we have to obey. This is the law, and we are not going to permit chaos."

When he was asked if the ministry would ever authorize a demonstration, Nazif replied: "Of course, yes. It did, and there have been peaceful demonstrations in the past permitted by the Interior Ministry."

A leader of the most active protest group, Kifaya, scoffed at the reply Wednesday, saying the prime minister spoke as if he were "not from Egypt but the Comoros."

Qandil also dismissed Nazif's argument that police violence was in response to protesters' violence, saying it was "deception."

Reporters who witnessed the demonstrations of May 4, 18 and 25 did not see protesters hurling stones at the police. The protests were in support of two reformist judges who faced a disciplinary tribunal for blowing the whistle on fraud in last year's legislative elections, the AP reports.

In one case on May 25, The Associated Press saw more than a dozen plainclothes police grab a protester, Mohammed el-Sharkawi, 24, as he walked away from a fading demonstration in which he had silently held up a placard saying "I want my rights back."