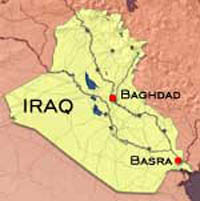 Tensions have been worsening in the Shiite-dominated area, where Britain has about 8,000 soldiers, and mostly Shiite militias have been attacking Sunnis and battling each other.

Standing at a podium with an Iraqi flag as a backdrop, Al-Maliki issued a strong denunciation of a wave of killings and kidnappings that Sunni religious leaders have blamed on Shiite death squads.

Shouting broke out in the auditorium before al-Maliki delivered his speech, with several tribal leaders accusing local officials and security forces of being behind the mounting violence. But the prime minister calmed them down from the podium, saying "we cannot negotiate with everybody shouting."

Al-Maliki later declared a state of emergency in the southern city of Basra, amid mounting violence, said Sayed Muhammad al-Haidari, a top Shiite official who was traveling with the prime minister. A state of emergency also has been imposed on Baghdad, Diyala and Anbar.

A parked car packed with explosives hit a police patrol in the northern Iraqi city of Mosul on Wednesday, killing at least five policemen and wounding 14, including a senior officer.

And bomb hidden in an air conditioner exploded in the mayor's office in Muqdadiyah, about 60 miles north of Baghdad, killing the mayor, Sheik Allaywi Farhan al-Dulaimi, a member of the Sunni Iraqi Islamic Party, and wounding three of his guards, police said. Provincial Gov. Raad Rashid al-Mula Jawad imposed a curfew on the city and deployed Iraqi army forces there.

Gunmen killed a Shiite muazzin, the man who calls for the five daily prayers, as he was leaving his house to go to the Imam Ali Mosque in southwestern Baghdad, Hussein said.

A 25-year-old sportscaster for al-Iraqiya TV, Ali Jaafar, also was gunned down in a drive-by shooting near his house in southwestern Baghdad, police Lt. Col. Falah al-Mohammedawi said.

His death came two days after CBS correspondent Kimberly Dozier was seriously wounded and two crew members were killed in a bombing in Baghdad. Dozens of journalists have been killed since the U.S.-led invasion of Iraq in March 2003.