Australia's opposition party cried foul Wednesday when one of its senior lawmakers was banished from Parliament for calling a Cabinet minister a "sniveling grub." The Labor Party complained of a double standard because the minister, Tony Abbott, had used the same insult against Labor legislator Kelvin Thomson last week without being ejected from the House of Representatives. Thomson's Labor colleague, Julia Gillard, had set a trap for Speaker David Hawker on Wednesday by interrupting a speech by Abbott and carefully repeating Abbott's words of a week earlier. 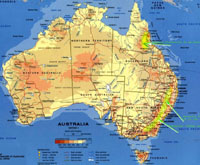 "I move that that sniveling grub over there be not further heard," Gillard said. When the speaker demanded she withdraw what he ruled unacceptable language, Gillard replied: "If I have offended grubs, I withdraw unconditionally." Hawker expelled Gillard for defying his order for an unconditional withdrawal.

"This is a ridiculous situation where if Tony Abbott says something it's fine; if I say exactly the same thing, I am suspended from parliament for 24 hours," she told reporters outside Parliament. Gillard's treatment provoked heated debate in Parliament and embarrassed Prime Minister John Howard, who takes pride in an improved standard of parliamentary behavior since his acid-tongued Labor predecessor, Paul Keating, was voted out a decade ago.

Keating once described conservative leader Howard as "a shiver looking for a spine to run up." His colorful lambasting of opposition lawmakers attracted unprecedented crowds to Parliament's public gallery. Hawker was unrepentant, saying politicians had been put on notice to improve their language. Abbott criticized the deputy speaker's handling of his own outburst, saying he should have challenged his repeated use of "grub." "The truth is, in our better moments, as our best selves, all of us would like this place to be better conducted," Abbott told Parliament, reports the AP.