President Hu Jintao of oil-hungry China met the Palestinian foreign minister and officials of other Arab governments on Wednesday at a conference on strengthening Sino-Arab ties. China wants to "further develop cooperation in all areas and earnestly promote the rapid development of our continuing friendly ties," Hu told a group of foreign ministers and other officials of Arab governments and the Arab League. 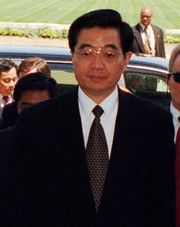 The two-day Sino-Arab Cooperation Forum comes as China scrambles to secure energy for its sizzling economy, which expanded by 9.9 percent last year and is one of the world's top oil importers. Meeting earlier, Chinese Foreign Minister Li Zhaoxing told the Arab delegates that China and their governments "share extensive common interests, which lays solid foundation for the development of China-Arab relations," the official Xinhua News Agency.

Li and the Arab officials "exchanged views on the Palestine-Israel situation, Iraq and the Iran nuclear issue," Xinhua said, without giving any details of the talks. Israel has protested China's invitation to Palestinian Foreign Minister Mahmoud Zahar, calling the Hamas-led Palestinian Authority that he represents a "terrorist government." A Chinese Foreign Ministry spokesman appealed to Hamas on Tuesday to abandon violence and recognize Israel conditions set by Israel and the West for negotiating with Hamas, reports the AP.