Pope Benedict XVI followed up his visit to Auschwitz with a call Wednesday for the world to resist the "temptation of racial hatred," saying it was at the root of anti-Semitism. "May contemporary mankind not forget Auschwitz and other similar factories of death in which the Nazi regime attempted to eliminate God in order to take his place," the German-born pope told his weekly general audience. 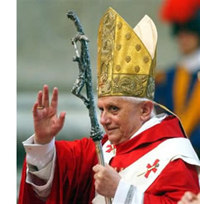 Benedict stopped Sunday at the Auschwitz-Birkenau camps in the final event of a four-day trip to Poland. As many as 1.5 million people, most of them Jews, died at the camps during World War II. "I wanted to stop at this place, sadly famous in the whole world, before returning to Rome," Benedict said in describing his pilgrimage. He said that there and in other camps "Hitler ordered the extermination of 6 million Jews."

He said the world must not "give in to the temptation of racial hatred, which is at the root of the worst forms of anti-Semitism." The pope prayed at Auschwitz, denouncing the mass murder of Europe's Jews, saying it was hard for a "pope from Germany" even to speak of the Holocaust. In his remarks Wednesday, before some 35,000 pilgrims in St. Peter's Square, he said all Christians must be involved "to avoid that the humanity of the third millennium might once again know similar horrors", reports the AP.