The Dalai Lama said Wednesday that independence for Tibet was not in the interest of the Himalayan region, which he said could benefit from China's economic growth if it remains part of the country. But the Buddhist leader reiterated his demands for autonomy for the province of 6 million people to preserve its unique culture and the Buddhist tradition. He said that once the Tibet issue is solved to the satisfaction of its people, China's image abroad will improve. 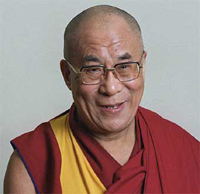 "We are not seeking separation. Tibet is a landlocked country, materially very, very backward. We want modernization, for that reason if we remain with China we get more benefits than alone," he told the European Parliament's foreign affairs committee in Brussels, where he was also holding talks with other religious leaders and EU and Belgian officials. "The economy is growing in China, and the effects have reached all parts of the country," he said. "Tibet is now also getting benefits. We are trying to materialize a meaningful autonomy."

The Dalai Lama fled his homeland during an anti-Chinese uprising in 1959 and now heads a government-in-exile based in northern India. On Monday, China announced the appointment of a new top official in Tibet, with no sign of any changes to its tough policies toward the restive Himalayan territory.

China maintains a heavy military presence in Tibet, after Communist troops occupied it in 1951. Beijing claims the area has been its territory for centuries. Many Tibetans say they were an independent country for most of their history. China berates the Dalai Lama as a separatist, but Chinese officials have held several rounds of meetings with his envoys since 2002. The talks are believed to be focused on the Dalai Lama's calls for more autonomy to protect Tibet's unique Buddhist culture.

"Last year we renewed direct contact with the representatives of China; five round-table discussions took place. However, the government has not acknowledged that. Inside Tibet there is no sign of improvement," the Dalai Lama said, adding that "democratic China is the only medicine for Tibet", reports the AP.