Roadside bomb explodes near Australian and Japanese troops in Iraq

A roadside bomb exploded near a convoy of Australian and Japanese troops in southern Iraq on Wednesday, injuring an Iraqi bystander, news reports said. The bomb went off in the city of Samawah at about 9:45 a.m. (0545 GMT) Wednesday and also damaged an Australian military vehicle, public broadcaster NHK and Kyodo News agency reported, citing an unnamed coalition military spokesman in Basra. 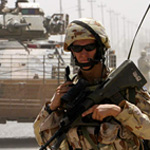 Roadside bomb explodes near Australian and Japanese troops in Iraq

The Australian convoy was traveling in front of the Japanese troops at the time of the explosion, according to NHK. An Iraqi bystander was injured in the attack, but there were no Australian or Japanese casualties, NHK said. An official at Japan's Defense Agency said the Japanese convoy heard the blast but returned to camp unaffected. She said she could provide no other details. Tokyo has about 550 non-combat troops in Samawah on a mission to fix waterworks and carry out other humanitarian tasks, but speculation is high that they will be withdrawn this year.

The troops, whose actions are strictly limited by Japan's pacifist constitution, have been heavily dependent on other coalition troops for security and have yet to suffer a single casualty in Iraq. The Australian military has roughly 470 troops and support personnel in Iraq, and has reported one death, reports the AP.