Iraqi Prime Minister Nouri al-Maliki arrived in Basra on Wednesday in a bid to stem escalating violence in the southern city. Tensions have been worsening in Shiite-dominated southern Iraq, where Britain has about 8,000 soldiers and other countries also have troops. Al-Maliki said earlier this week that his trip was an effort to "heel the rift and find a solution for what caused the latest events in Basra." 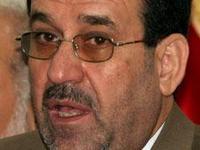 He planned to meet with religious leaders and city officials as well as representatives of the main political parties. Abbas al-Bayati, a Shiite Turkoman member of the United Iraqi Alliance, also noted the port city's strategic location on the Persian Gulf. Basra is Iraq's second-largest city, 550 kilometers (340 miles) southeast of Baghdad. In the months after the 2003 invasion, British troops enjoyed relative peace in southern Iraq compared with the restive Sunni regions further north.

But violence in the region has escalated. Trouble in the largely Shiite region is due in part to the growing influence of radical cleric Muqtada al-Sadr, who led two armed uprisings against U.S.-led forces in 2004 and who has been an outspoken critic of the U.S.-led foreign military mission.

Last September, British troops battled Shiite gunmen in Basra after two British undercover soldiers were seized by police, whose ranks have been infiltrated by Shiite militiamen. British forces staged a raid that freed the men. Tensions boiled again in February when the London newspaper News of the World published video images that appeared to show British soldiers beating Iraqi civilians during a riot in Amarah in 2004.

Shiite anger also has been stoked by a perceived shift in U.S. policy since the arrival of U.S. Ambassador Zalmay Khalilzad, a Sunni Muslim who has criticized the Shiite-led Interior Ministry for human rights abuses and made overtures to Sunni insurgents in hopes of getting them to lay down their arms. Two British soldiers were killed and two others wounded in a roadside bombing in Basra on Sunday, bringing to nine the number of British personnel who have died in the city this month and pushing total British deaths in the past three years to 113. American deaths, meanwhile, are approaching 2,500.

Sunni leaders also ordered the closure of all Sunni mosques in the city and urged preachers not to hold Friday prayers last week to protest the killing of a local Sunni cleric. Wafiq al-Hamadani, the imam of Kawaz mosque in Basra, was slain Friday when gunmen in a speeding car opened fire on him as he was walking to his mosque, reports the AP.