A rock slide hit several vehicles on a major north-south highway through the Swiss Alps early Wednesday, killing two people, police said. The highway was blocked on the northern approach to the St. Gotthard tunnel, a major route linking northern Europe with Italy, Uri cantonal (state) police said in a statement. No other people were injured. 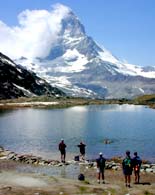 Traffic will be suspended for the entire day on the main A2 highway in both directions and on its approaches as well as on the parallel trunk road, which was not affected by the rock slide just days before a European holiday weekend, police said. Road users were advised to use the San Bernardino route through the Alps, which is further east and is not linked to main highway network. Trucks were temporarily banned from transiting Switzerland via either route and had either to travel via passes far to the east or west, or to transfer their loads to rail, reports the AP.