24 dead in boat accident in Kashmir

Sailors and police pulled nine bodies from a lake in Kashmir on Wednesday, raising the death toll to 24 in the capsizing of an overcrowded navy boat that had been carrying schoolchildren on an outing, an official said. After the boat overturned Tuesday, a dozen students and teachers swam ashore or were rescued from Wular Lake, about 50 kilometers (30 miles) north of Srinagar, the summer capital of India's Jammu-Kashmir state, said army spokesman Col. V.K. Batra. 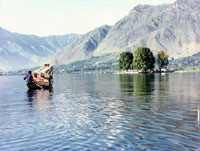 24 dead in boat accident in Kashmir

Twenty of the dead were students, said a local police superintendent, Junaid Ahmed. The incident occurred after about 30 students, ages 7-17, had pleaded with the sailors to take them for a ride around the lake in their motorboat, Batra said. "But the ride got the children so excited that they leaned toward one side of the boat at a bend, resulting in the capsize," Batra said. "The sailors jumped in and rescued 12 students and a teacher."

The boat was designed to hold only 10 adults, officials said. The state's top elected official, Chief Minister Ghulam Nabi Azad, has ordered a judge to investigate the accident. Meanwhile on Wednesday, thousands of people attended a funeral for the children in the nearby town of Handwara. Ahmed said angry villagers have pelted police with stones and ransacked a boat shed, blaming the tragedy on negligence, reports the AP.