Afghan authorities declared a nighttime curfew in Kabul Monday after the worst rioting since the fall of the Taliban, sparked by a U.S. military convoy accidentally plowing into traffic. At least eight people died and 107 were injured across the city. Chanting "Death to America !", rioters stoned the U.S. vehicles then headed to the city center, ransacking the offices of international organizations and searching for foreigners highlighting rising resentment toward international troops in Afghanistan after recent civilian deaths during combat. 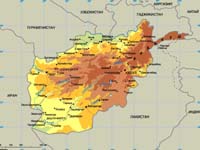 Gunfire, at times intense, rang out across Kabul as hundreds of young men smashed store fronts, carted off goods and set fire to police cars and station houses in the worst riots since the U.S.-led military alliance ousted the Taliban regime in late 2001. Afghans alleged U.S. and local troops fired on the crowds. Patience with the 23,000 U.S. troops in Afghanistan is fraying after the deaths of Afghan civilians, including at least 16 people in an airstrike targeting Taliban fighters in a village last week, during some of the fiercest fighting in four years in the volatile south of the country.

While most Afghans support the presence of foreign troops to stabilize a country devastated by a quarter century of war and civil conflict, many also harbor resentment. Those feelings have surfaced with increasing regularity in the past year, during violent protests over alleged desecration of the Quran at the U.S. prison at Guantanamo Bay and the publication in European newspapers of cartoons depicting the Prophet Muhammad.

"We don't want Americans in our country. They don't care about poor people. They killed innocent people today and this is not the first time," said 28-year old protester Abdul Shakoor. "They do it all the time and in the end they say it was a mistake. It's not acceptable to us any more."

The government imposed a nighttime curfew. Yousuf Stanezai, an Interior Ministry spokesman, said all Kabul residents were to stay off the streets between 10 p.m and 4 a.m. Anyone found outside would suffer "serious measures," he said, without elaborating. The U.S. military expressed regret for the accident, which it said came after a mechanical malfunction sent a large cargo truck careering into about a dozen vehicles at a Kabul intersection. The military was investigating the incident.

The U.S.-led coalition said at least one person was killed and six injured in the crash, but Afghan authorities gave a higher toll. A statement from President Hamid Karzai's office said five died in the accident. Police said three were killed and 16 were injured. "This was a tragic incident and we deeply regret any deaths or injuries resulting from this incident," U.S. military spokesman Col. Thomas Collins said in a statement.

A Kabul police chief, Sher Shah Usafi, said another person was killed when U.S. troops fired into a crowd of stone-throwing protesters soon after the crash, but the U.S. military couldn't confirm that. An Associated Press reporter saw Afghan security forces firing on protesters, injuring at least three people. Abdullah Fahim, a Health Ministry spokesman, said that eight bodies were brought to hospitals in Kabul and 107 more Afghans were treated for injuries.

He said there were no foreigners among the wounded or dead. He had no details on how the casualties occurred, and it wasn't immediately clear if the toll included people from the traffic accident. The rioting spread from the accident site in northern Kabul to the center of the city, where hundreds of Afghan army troops and NATO peacekeepers in tanks were deployed.

The chanting protesters marched on the presidential palace and rioters smashed police guard boxes, set fire to police cars and ransacked buildings, including the compound of aid group CARE International. An AP reporter saw demonstrators pull a man who appeared to be a Westerner from a civilian vehicle and beat him. The man escaped and ran to a line of police, who fired shots over the heads of the demonstrators.

Some protesters said they were targeting non-Afghans. "Today's demonstration is because Americans killed innocent people. We will not stop until foreigners leave the city. We are looking for foreigners to kill," one protester in his late 20s, Gulam Ghaus, said near where rioters burned a police post.

AP reporters heard several 20-second bursts of heavy automatic gunfire, coming from the direction of the U.S. Embassy. It subsided but gunfire was then heard sporadically before the riots appeared to calm before nightfall. Staff at the U.S. Embassy were moved to a secure location within the heavily fortified embassy, said Chris Harris, an embassy spokesman. He had no information on the gunfire heard near the mission, reports the AP.