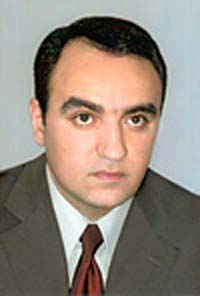 Artur Bagdasarian, head of the party Orinats Yerkir, or "Country Ruled by Law," met the deadline to confirm his resignation, which he had tendered to the legislature last week.

Orinats Yerkir had been part of the three-party governing coalition since 2003, when it teamed up with the Republican Party and Dashnak-Tsutyun. It had 20 seats in the 131-seat parliament, but Bagdasarian said when he announced plans to resign earlier this month that nine of the lawmakers had quit the party in the previous weeks.

Bagdasarian triggered a political scandal in the Caucasus Mountain nation last month when he reportedly told a German newspaper that Armenia's future lies with the European Union and NATO, and that Russia should not block its Westward path, the AP reports.

President Robert Kocharian quickly disavowed the speaker's statement, saying that Armenia's close military ties with Russia and other regional countries provide sufficient security and that it has no pans to join NATO.

Critics of Kocharian say he has violently cracked down on dissent, allowed corruption to flourish and done little to improve the lot of impoverished Armenia's 3.3 million people.