The dream of invisibility to come true soon 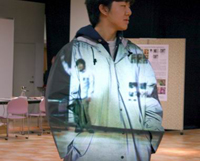 The dream of invisibility to come true soon

The researchers, some based at Imperial College London, have even created a prototype material capable of cloaking objects against radar waves as proof of their theory, Times Online reports.

Inspiring the new research is a type of material known as "metamaterial." Metamaterials have special properties because they are built with internal structures small enough to interact with light or other radiation. This allows scientists to build devices that can do things, such as bending light, in unique ways.

Two separate teams of researchers have come up with theories on ways to use experimental metamaterials to cloak an object and hide it from visible light, infrared light, microwaves and perhaps even sonar probes, according to Xinhua

Any object placed in the hole would be hidden from sight. The medium would create the ultimate optical illusion: invisibility," Leonhardt wrote. "Such devices may be possible. The method developed here can be also applied to escape detection by other electromagnetic waves or sound."

In this new theory, which is from that used on modern "stealth" bombers, which bounce radar off their surfaces so they cannot be seen, an object would be encased in a shell of metamaterials and they would create an illusion akin to a mirage, said David Schurig of Duke University in North Carolina, who worked on a second report, which also appears in the latest Science journal.

The light, or microwaves, or radar would travel along the threads of the cloth, ending up behind the object without having touched it. But anyone making such a cloak would have to choose what form of radiation one wanted invisibility from, Schurig said. The invisibility would work both ways - a person hidden from the visible light spectrum would have to use infrared or sonar or microwaves to see out, he said.