General Motors Corp. will build a car production facility in Russia , the economics ministry announced Monday, several months after the U.S. automobile giant's landmark joint venture temporarily shut down amid a parts dispute with its state-controlled Russian partner. The announcement came as Volkswagen AG's chairman Bernd Pischetsrieder signed an agreement to build a nearly 400 million (US$510 million) plant in the city of Kaluga , southwest of Moscow . 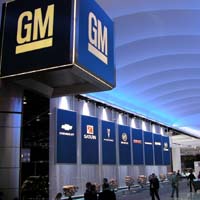 GM Vice President Carl-Peter Forster was due to conclude the deal at an evening signing ceremony, the Economic Development and Trade Ministry said on its Web site. The ministry gave no further details except to say that the deal was connected to a government resolution regulating the import of car parts.

Marc Kempe, a spokesman for GM in Europe , confirmed Forster would be in Moscow but denied any final deal had been reached. "Yes, we are in negotiations looking at the possibility of investing in an assembly plant, but no, no final decision has been reached," he told The Associated Press.

Trade and Economic Development Minister German Gref told President Vladimir Putin that the deal called for GM to invest US$115 million in the first stage of the project and more later, the RIA-Novostio news agency reported. He said construction on the plant in the St. Petersburg area would begin in June. General Motors was an early major foreign investor in Russia 's automobile industry, launching a US$340 million (285 million) joint venture with Soviet-era manufacturer AvtoVaz in the city of Togliatti in 2001.

In recent months, however, production temporarily halted due to a parts dispute, leading to speculation that the venture would be broken up and that GM would follow other major international car manufacturers and build its own plant. The two sides were also unable to agree on the joint construction of an engine plant in the city of Samara last year, with AvtoVaz saying it feared it would be unable to recoup its investment.

Russian media reports have said GM is already planning to use a 70-hectare (170-acre) site outside St. Petersburg for the plant, which will produce the Chevrolet Aveo and Lucetti models. AvtoVaz last year was effectively taken over by Rosoboronexport, the state arms export agency.

Major international auto makers have steadily increased their investment and production in Russia, seeking to tap the nation's growing middle class and a lack of quality Russian-designed and built vehicles. Toyota broke ground on a US$140 million ( Ђ 115 million) facility outside of St. Petersburg last year, as did France's Renault SA, which opened a US$250 million (206 million) assembly plant for its Logan model in Moscow and South Korea's Kia Motors Corp., which launched an assembly line for its Spectra model in the central city of Izhevsk.

VW announced its deal to build a 115,000-vehicle plant in Kaluga on Friday after also considering four other locations, and company chairman Bernd Pischetsrieder signed the deal with Gref in Moscow on Monday. According to the Ministry, the German carmaker will initially spend 270 million (US$345 million) on the plant, with a further 100 million (US$128 million) to be invested to launch full-scale production.

Gref said VW was planning a "gift" for Russian drivers. "The company has plans to roll out a special car for the Russian market," he said in televised comments. "The decision took a long time ... this was not a fast path and our competitors have overtaken us to an extent we'll have to be all the more active to liquidate this delay," Pischetsrieder said.

A spokeswoman for Gref's ministry said the facility would be commissioned in September 2008, and would initially assemble the Skoda Octavia but would eventually roll out VW's Polo, Passat and Touareg brands, which are popular in Russia . Construction is to begin in August, she said. Volkswagen hopes to increase its annual sales in Russia from the current 30,000 to 150,000 by the end of 2010. According to the European Bank for Reconstruction and Development, Russia has about 157 cars per 1,000 people on par with Argentina but far below the Polish figure of 250, reports the AP.