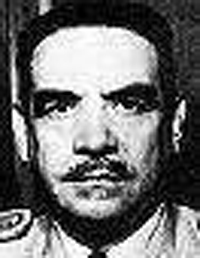 Lucas Garcia lived in Venezuela since the 1980s, and will be buried there, his former sister-in-law Maria Nana Winter told a Guatemalan radio station, the AP reports.

As president, Lucas Garcia launched scorched-earth campaigns that wiped out dozens of remote, largely Mayan Indian villages in an attempt to eliminate civilian support for leftist guerrillas battling the government during a 1960-1996 civil war.

Some 200,000 people were killed or vanished during the 36-year conflict, the vast majority of them Mayan civilians. Rios Montt intensified the campaigns begun by his predecessor, and he and Lucas Garcia are widely considered the worst offenders in a war that saw thousands of human rights atrocities.

According to a 1999 report by a U.N.-sponsored truth commission, the army and civilian militias commanded by soldiers carried out at least 45 massacres during Lucas Garcia's term.

The commission found that Lucas Garcia and Rios Montt oversaw state-sponsored acts of genocide against Mayan Indians thought to be "an actual or potential support base for the guerrillas" in four central and northwestern provinces.

Lucas Garcia was briefly placed under house arrest in Venezuela in 2005 after a Spanish judge issued a warrant for his arrest for rights abuses committed during his administration.

Spain sought to try him for his role in a bloody 1980 police raid on the Spanish Embassy in Guatemala City that killed 37 people including Vicente Menchu, the father of Indian rights activist andNobel Peace Prize winner Rigoberta Menchu.