President Traian Basescu will make a two-day visit to Paris this week, his first official engagement since he underwent surgery for a slipped disc earlier this month, his office said Monday. Basescu will travel to the French capital on Tuesday and will meet President Jacques Chirac, Senate President Christian Poncelet and National Assembly speaker Jean-Louis Debre. He will also meet other lawmakers and members of the French business community, a statement from his office said. 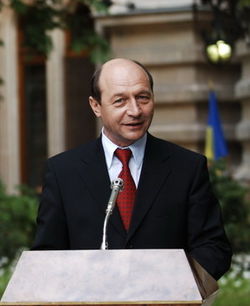 Talks between Basescu and Chirac will focus on Romania 's entry to the European Union, which it hopes to join next year. He will also meet Pierre Moscovici, the French Socialist lawmaker who presented Romania 's EU report to the European Parliament. Basescu will also meet former Senegalese President Abdou Diouf, who heads the International Organization of the Francophonie, a grouping of French-speaking countries. Romania hosts the organization's annual meeting in September.

Basescu, 55, flew to Austria on May 8 for surgery on a slipped disc at Vienna 's General Hospital . He is currently recuperating in a hospital in Bucharest . He will be accompanied on his trip to Paris by his personal doctor, Constantin Popa, and will return to hospital after the visit, said Mihia Berteanu, a doctor at the Elias Hospital where Basescu is recuperating, reports the AP.