Federal scientists have started testing migratory birds for signs of a dangerous bird flu that could show up on this continent this spring. 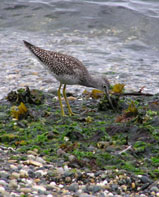 The testing of shorebirds began Wednesday at an Anchorage coastal wildlife refuge, said Bruce Woods, spokesman with the U.S. Fish and Wildlife Service.

It is the first sampling of a summer-long project to swab birds for bird flu throughout the state. Nationwide, the goal is to sample 75,000 to 100,000 wild birds. In Alaska, about $4 million (Ђ3.13 million) in federal money will be allocated to study about 15,000 birds, Woods said.

"We had some success in catching some of the target species," Woods said Thursday.

More than 40 species of waterfowl and shorebirds are considered susceptible to infection by a highly pathogenic H5N1 bird flu virus that's killed more than 100 people, in other parts of the world, mostly in Asia.

Scientists will only test birds in the Anchorage area through early next week. "In this location, it's very brief, birds go through and they're gone," he said.

To screen the birds for the deadly virus, the U.S. Fish and Wildlife Service and Alaska's Fish and Game Department also are setting up more than 50 remote backcountry camps accessible mainly by float planes or boats.

Alaska is an ideal bird flu laboratory because it's at the crossroads of migratory pathways for birds flying between the United States and other countries. Some of these birds arrive in Alaska each year from Asia, reports AP.