Federal agents digging up a horse farm in the search for the body of the famed former American labor leader Jimmy Hoffa expect to be there a couple weeks, an FBI official said Thursday. 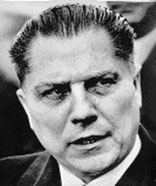 Investigators on Wednesday began combing the area, where organized crime figures used to meet, in a search for the remains of Hoffa, who disappeared in 1975, according to a search warrant obtained by The Associated Press.

Daniel Roberts, special agent in charge of the Detroit FBI field office, said Thursday that the search would take some time and agents planned no further public statements until they had something decisive to report.

Hoffa had been aggressively investigated in the 1960s for corruption by then-attorney General Robert F. Kennedy. He was sent to prison in 1967 for looting the pension fund of a long-haul truckers' union and jury-tampering. President Richard M. Nixon commuted his sentence in 1971.

In the two years that Roberts has headed up the FBI's operation in Detroit, he said "this is the best lead I've seen come across on the Hoffa investigation," reports AP.

"We're searching for evidence related to the Hoffa case. It's a big operation. After 30 years of searching for him, we hope we can put this to rest."

Jimmy Hoffa's alleged grave is in Milford Township, NW of Detroit, is said to have been a meeting point for organized crime figures, and is only 15 miles away from the place James Riddle Hoffa (Jimmy Hoffa) was last seen: the Machus Red Fox restaurant in Bloomfield Township, informs Spotlightingnews.