RU-486 has been the subject of enormous controversy since it was approved by the US Food and Drug Administration six years ago. Australian government, allowed sales of drug three month ago, also doubts the possibility of further sales of RU-486, ABC Online reports. 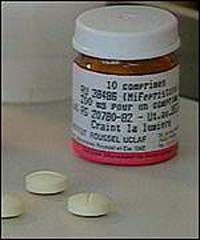 "There is a serious problem with RU-486, and failing to address this problem by disguising it, ignoring it, minimizing it or causing confusion is a shameful failure," said Rep. Mark Souder (R-Ind.).

Souder, chairman of the drug policy subcommittee that held the hearing, and Rep. Jean Schmidt (R-Ohio) criticized the Food and Drug Administration for refusing to withdraw RU-486 despite the deaths and other side effects. Souder, who opposes abortion, said the drug should not have been approved,  Chicago Tribune reports.

The hearing intensified pressure on the FDA, which has been investigating whether RU-486 contributed to the fatal infections. Noting those deaths and the possibility that others might have gone unreported, abortion opponents in Congress have been lobbying officials at the White House and the FDA to stop sales of the pill, also called mifepristone or Mifeprex.

About 575,000 American women have used RU-486. Taken up to 49 days after a pregnancy, the pill, which kills a fetus, is followed by use of a companion drug, misoprostol, that expels the dead fetus. Studies have shown that the procedure is safer than childbirth. But this method has not only advantages.Drug on the market associated with the deaths of at least eight women, nine life threatening incidents, 232 hospitalisations, 116 blood transfusions and 88 cases of infection.