The entire leadership of the Turkish military, which has led three coups in the past and regards itself as the guardians of secularism, lined up besides the flag draped coffin of Judge Mustafa Yucel Ozbilgin, a clear message that they will defend the secular system. Prime Minister Recep Tayyip Erdogan was absent from the funeral. 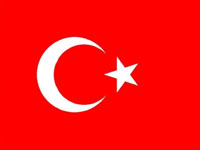 On Wednesday, a militant burst into Turkey's highest administrative court and shouting "I am a soldier of God" shot five judges, fatally wounding Ozbilgin. The suspect said the attack was in retaliation for the court's recent ruling against promoting a teacher who wore an Islamic-style head scarf outside of work, authorities said.

The head scarf has long been a flashpoint between Islamists and secularists. Turkey bans wearing head scarves in universities, in state offices and at state functions, fearing that the headgear symbolizes a desire to weaken the secular identity of the state.

Erdogan's wife, Emine, who wears a head scarf, for example, cannot attend many state functions. Erdogan's government has vowed to try and ease the restrictions and has been trying to raise the profile of Islam in this predominantly Muslim state, where secularism is enshrined in the constitution.

More than 15,000 angry Turks, from students to judges dressed in their robes, marched to the mausoleum of Mustafa Kemal Ataturk, the founder of modern and secular Turkey, in a show of loyalty to secularism. Many were chanting "Turkey is secular and will remain secular."

They laid a wreath decorated with red and white carnations, the colors of the Turkish flag, at the mausoleum. Some were tearful as they kissed the marble stones of the mausoleum, the AP reports.

Later, some 40,000 people marched to the city's main mosque to attend memorial services for Ozbilgin, many of them chanting slogans calling for the government's resignation.