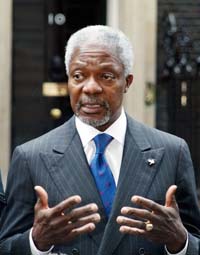 Annan, in Japan as part of a tour of Asia, also urged Japan and its neighbors China and South Korea to take major steps to repair strained relations. Tokyo is squabbling with the others over territory, maritime resources, and wartime history.

In comments in a speech at Tokyo University and later at the Japan National Press Club, Annan urged countries involved in the dispute over Iran to avoid inflaming tensions and to work toward a negotiated settlement.

Annan's comments reflect growing international concern over Iran's nuclear development, which have been fanned by that country's mocking dismissal of a possible offer of a light-water reactor as part of incentives to suspend uranium enrichment.

The five permanent Security Council members and Germany are working on a package to present to Iran, the AP reports.

In prepared remarks for a speech made earlier at Tokyo University, Annan said it was his "strong hope that the current discussions in the Security Council will give new momentum to the quest for a negotiated solution."

Annan refused, however, to say what kind of gestures he had in mind or who should make them. China has repeatedly demanded that Koizumi abandon further visits to the shrine as a condition for better ties.