Cholera in Tanzania: 40 killed since March

An outbreak of cholera has killed nearly 40 people and sickened hundreds more on mainland Tanzania and the semiautonomous Zanzibar archipelago since March, officials said Thursday. 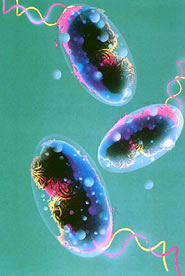 Cholera in Tanzania: 40 killed since March

The death toll in Zanzibar was 22 and will likely rise, said Dr. Omar Mohammed Suleiman of the Ministry of Health and Social Welfare in Zanzibar. At least 15 have died on the mainland, said Dr. Deo Mtasiwa, chief physician of the Dar es Salaam City Council.

Cholera is transmitted through contaminated water and is linked to poor hygiene, overcrowding and bad sanitation. Symptoms include diarrhea and vomiting, which can kill unless treated quickly.

The disease erupted amid heavy rains in the region hit by a drought that has hurt farmers across East Africa, leading to severe food shortages in Tanzania, Kenya, Somalia, Ethiopia and Djibouti. The rain is washing garbage and other waste into wells or water catchment areas.