Supporters of President Leonel Fernandez celebrated in the streets of the Dominican Republic as returns showed his party leading congressional elections, although officials said many races were still too close to call. 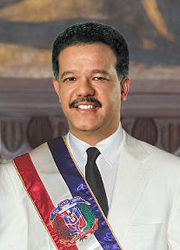 Fernandez appeared poised Wednesday night to make significant gains in the first legislative elections since he took power and reshape the country's Congress, in which his center-right party currently has only one senator and about a quarter of all representatives.

With more than 1.2 million votes counted, Fernandez's Dominican Liberation Party had 51 percent of the national vote count and was ahead in races for 19 of the Caribbean nation's 32 provinces, according to election officials.

But the country's electoral commission said that in several provinces the races were as narrow as just a few hundred votes, and in one province, Fernandez's party led by just nine.

Former President Hipolito Mejia's Dominican Revolutionary Party, which holds majorities in both houses of Congress, was leading in eight races, and the Social Christian Reformist Party was ahead in five.

The two parties, which joined campaigns and did not compete with one another in 27 provinces, had 26 and 21 percent of the national vote at last count, respectively.

More than 5.4 million people were registered to vote, but officials did not estimate voter turnout. The commission did not say when final results would be available.

Some supporters of Fernandez's party took to the streets of Santo Domingo on Wednesday, waving flags and taunting opposition candidates.

Four people were injured during pro-Fernandez celebrations in the province of Montecristi on the Haitian border, the newspaper Listin Diario reported.

Twenty-two parties from across the political spectrum fielded candidates in the legislative elections. With 28 representatives added this year, 210 legislative seats and 151 mayoral spots were up for grabs, repots the AP.