Japanese and U.S. officials on Thursday began a second day of talks on a survey of the U.S. meatpacking industry, as Washington sought a reopening of the Japanese market to U.S. beef imports. 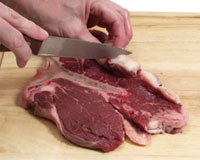 Chuck Lambert, U.S. undersecretary for marketing and regulatory programs, and a team of agriculture officials resumed their meetings with officials from Japan's foreign, health and agriculture ministries.

Thursday's discussions were expected to touch on the shipments of banned beef parts from U.S. plants to Hong Kong and Taiwan, Kyodo News agency said, without identifying its sources.

Kugita said he could not elaborate further on talks in progress, but Kyodo quoted an unnamed official as saying Japan believes the two countries can talk about future steps to restart beef trade based on the report.

Tokyo has said that before starting talks on reopening its market to U.S. beef it wants first to review the survey results and get answers to questions about the 37 meatpacking plants authorized to ship to Japan.

Media reports have said Tokyo wants to lift the ban on U.S. beef imports by the time Prime Minister Junichiro Koizumi visits the United States in June. However, a government spokesman said Wednesday the decision would be based on whether public safety had been assured, rather than political considerations.

Japan initially shut its profitable market for U.S. beef in December 2003 after the first discovery of mad cow disease in the United States. The ban was eased in December 2005 to allow the import of meat from cows 20 months old or younger, reports the AP.