One of the world's most hunted drug traffickers, whose criminal organization compared in size to that of late drug lord Pablo Escobar, has been arrested in Brazil as part of a major international bust, officials said. 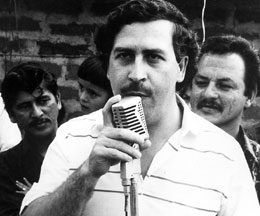 Brazilian authorities said Wednesday that Colombian-born Pablo Rayo-Montano, who had been on the run for a decade, was captured the day before at his home in Sao Paulo as part of a three-year operation spearheaded by the U.S. Drug Enforcement Administration and police in Brazil, Panama and Colombia.

More than three dozen others were arrested during simultaneous raids Tuesday in the United States and Latin America, officials said. Also seized were three islands owned by Rayo-Montano off the coast of Panama and a trove of expensive artwork, yachts, real estate holdings and millions in cash.

The cartel allegedly used speedboats, cargo vessels and submarine-like vessels to ship more than 15 tons (12.5 metric tons) of cocaine a month from clandestine Colombian ports to the United States and Europe, officials said.

"The Rayo-Montano trafficking organization ranked up there with Pablo Escobar and the Cali Cartel in terms of the amount of cocaine it was able to smuggle into the United States," Dave Gaddis, head of the DEA in Bogota, Colombia, told The Associated Press.

Escobar, history's most notorious drug trafficker, led the now defunct Medellin cocaine cartel and was shot dead by police in December 1993. Much of the drug trafficking industry was subsequently taken over by Colombia's Cali Cartel.

Called Twin Oceans, the latest operation targeted the drug network allegedly run by Jackson Orozco-Gil and the brothers Domingo and Mars Micolta-Hurtado from Colombia's Caribbean coast. All three were arrested Tuesday in Colombia and Panama.

But the godfather of the organization, the DEA said, was "Don Pablo," who managed the multinational empire from Sao Paulo, where he's been living the past three years.

"The Rayo-Montano organization had its own private, rogue navy to run a drug business that was nearly as sophisticated as a small nation," DEA administrator Karen P. Tandy said in a press release Wednesday.

As a result of the investigation, officials in nine countries, Argentina, Brazil, Colombia, Ecuador, Costa Rica, Panama, Venezuela, Mexico and the United States, arrested more than 100 people and seized 47.5 tons of cocaine (43.5 metric tons) and nearly US$70 million ( Ђ 55 million) in assets throughout the world, the DEA said.

Of the more than 30 arrests on Tuesday, six were made in the United States, including one in Los Angeles in which a federal agent posed as a pizza deliverer, a DEA official said on condition of anonymity because he was not authorized to speak about the operation. Four people were arrested in Miami. One arrest was made in Indianapolis.

The U.S. Department of Justice considered the Rayo-Montano organization one of its top drug targets, with a comprehensive infrastructure capable of everything from the production of cocaine and heroin in Colombia to smuggling and wholesale distribution in Europe and the United States, reports the AP.