Non-smoking men have more risk to get lunge canser, than non-smoking women 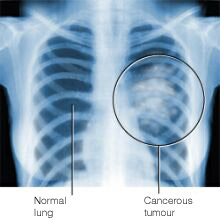 Non-smoking men have more risk to get lunge canser, than non-smoking women

"The conventional wisdom ... is wrong," concluded Dr. Michael Thun, lead author of the report in the Journal of the National Cancer Institute.

However, more black women who had never smoked died of lung cancer than their white counterparts.

Lung cancer is the world's and the U.S.' most common and deadliest malignancy. Smoking cigarettes is the main cause, the AP reports.

But about 15,000 of the deaths will occur in people who never used cigarettes. Other known causes: breathing secondhand smoke; exposure to radon and asbestos; smoking other tobacco products; and high-dose radiation.