A woman suspected of killing nine of her newborn babies went on trial Thursday. The case shocked Germans and fueled calls for tighter protection for minors. 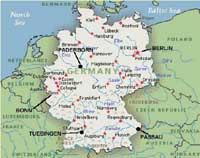 Police arrested the woman, identified only as Sabine H., after discovering the remains of the nine infants last July buried in flower pots and a fish tank in the garden of her parents' home in a village near the Polish border.

The 40-year-old appeared Thursday before a state court where she faces eight charges of manslaughter over the deaths of the infants. She could be jailed for up to 15 years, if convicted.

The death of a ninth child is covered by a statute of limitations.

Defense lawyer Matthias Schoeneburg told the court on Thursday that his client wished to make no statement.

The court earlier dropped murder charges against the woman, arguing there was insufficient evidence that she had intended to hide her alleged crime.

Prosecutors say DNA tests prove that the children, who are believed to have died between 1988 and 1998, each of them shortly after their birth, were those of the woman and her husband.

It remains unclear how the pregnancies went unnoticed by family members and friends, reports the AP.