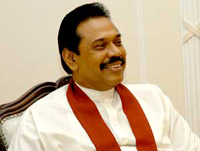 In an address to the nation, Rajapaksa said the attack was an indication that rebels no longer believed that negotiations would help resolve the ethnic conflict, despite the government's efforts to proceed with the peace talks.

'It is clear that the LTTE (Tamil rebels) are trying to create communal violence and try to get the benefit of it', Rajapaska said.

Late Tuesday, the army fired artillery at rebel-held areas in Sampoor, Ilakkanthai and Kattaparichchan in the Trincomalee district, 250 kilometres north-east of Colombo.

National television described the attacks as a retaliation for rebel attacks in the area.

'The commander has undergone an emergency surgery and is in a stable condition,' said the head of the National Hospital, Dr Hector Weerasinghe.

The commander was being driven from his office in the high- security military complex for lunch when the bomb was detonated at around 1:40 p.m. (0810 GMT), army officials said.

The attacker had posed as a pregnant woman visiting the hospital for army personnel in the compound, the officials added.

The soldiers killed in the explosion were members of the commander's motorcycle escort. The three civilians killed had been visiting patients at the army hospital.

The army said it believed Tamil rebels with the Liberation Tigers of Tamil Eelam (LTTE) were responsible for the attack.

The attack occurred on the day the LTTE was to have begun a second round of peace talks with the Sri Lankan government in Geneva, but last week the rebel group refused to attend. They had earlier blamed the government for not facilitating a meeting between rebel military commanders in eastern Sri Lanka and their leadership in the north before the talks, reports Monsters and Critics.