Palestinian president says he has power to remove Hamas from power

The Palestinian president said in an interview aired Monday that he has the authority to remove the newly elected Hamas government from power, and warned the government that it had little choice but to negotiate with Israel. 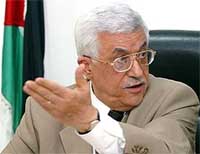 Palestinian president says he has power to remove Hamas from power

"The constitution gives me clear and definite authority to remove a government from power, but I don't want to use this authority. Everyone should know that by law this power is in my hands," Mahmoud Abbas said in an interview with CNN-Turk that was recorded before he arrived in Turkey on Sunday.

Asked about the possibility of Abbas bring down the Hamas government, a senior Hamas official in the West Bank said the group would "not leave in silence," and threatened to stop recognizing a truce with Israel.

"We will go, but we will not recognize the Palestinian political regime. We will not participate in any new election and we will go underground as we did before and we will not adhere to any commitments, any truce, by anyone. Being ousted from power will have a heavy price for everyone. We hope not to reach that."

The official spoke on condition of anonymity because he was not authorized to discuss the matter with the media, the AP reports.