Thousands greets Brazil's first astronaut as he returns to hometown

Brazil's first astronaut was greeted by thousands of people as he returned to his hometown on Friday, two weeks after spending eight days aboard the international space station. 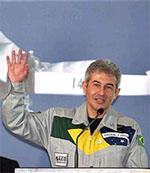 Thousands greets Brazil's first astronaut as he returns to hometown

Nearly 5,000 people were on hand to welcome Marcos Pontes, 43, in Bauru, 400 kilometers (250 miles) west of Sao Paulo. They cheered him as he paraded through the city on a fire truck.

"It's good to arrive home and see this," he told Globo TV.

Pontes arrived in Brazil on Wednesday and was greeted as a national hero by President Luiz Inacio Lula da Silva, who presented him with the National Order of Merit medal.

Pontes was featured daily on Brazilian TV news broadcasts and across newspaper pages and was a source of pride for Brazilians.

"I want to say that the money we spent to send you on this mission is very little in comparison to what you have brought to Brazil," Silva said.

Pontes' trip was met with criticism by some Brazilians because it reportedly cost the Brazilian Space Agency US$10 million (Ђ8.1 million).

Pontes blasted into space aboard a Russian Soyuz rocket on March 29 along with Russian Pavel Vinogradov and American Jeffrey Williams, who stayed in the space station.

Pontes returned to Earth on April 8 with American Bill McArthur and Russian Valery Tokarev, who had spent six months on the space station.

Pontes, a Brazilian air force lieutenant colonel, trained in the United States and had been scheduled to fly to the station aboard a U.S. shuttle plans that were scrapped after the February 2003 Columbia explosion. Brazil and Russia then opened talks on Pontes' traveling into orbit aboard a Soyuz craft, reports AP.