A drive-by shooting killed a Shiite baker heading to work in Baghdad on Friday, and the bullet-ridden bodies of two other Iraqis were found in the capital, police said. The killings occurred in two areas of Baghdad with mixed populations of majority Shiites and minority Sunni Arabs, and appeared to be part of rising sectarian violence in Iraq . Five Iraqi policemen also died in two attacks outside the capital, police said. 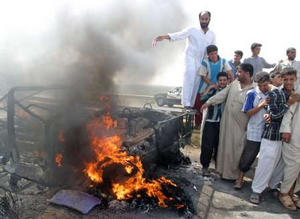 The baker, Nadil Adel Ashor, was killed outside his home by unidentified gunmen in a speeding car in Dora, southern Baghdad , said police 1st Lt. Maitham Abdul-Razzaq. On Thursday, armed men broke into another bakery in Dora and killed two Shiite workers. Two bullet-riddled bodies also were found in the capital by Iraqi police on Friday, the day of worship in mostly Muslim Iraq, one in Dora and the other in Mansour, western Baghdad, another Sunni-Shiite district, said police 1st Lt. Thair Mahmod. He said the identities of the victims and the motives for the killings were not immediately known.

At 7:30 a.m , a roadside bomb aimed at a U.S. military patrol exploded in Dora, missing its target but wounding two Iraqi civilians who were driving nearby, said Abdul-Razzaq. A U.S. Army official confirmed that the attack had missed the American soldiers. Three Iraqi policemen also were wounded by a roadside bomb that hit their patrol on Friday morning in Baghdad 's western neighborhood of Yarmouk, said Abdul-Razzaq. When police and witnesses rushed to the scene a second bomb exploded, said an AP photographer who was there.

In Mosul , 360 kilometers (225 miles) northwest of the Iraqi capital, four policemen were killed when their patrol hit a roadside bomb, police Gen. Wathiq Abdul-Qader said. Two policemen and a bystander were wounded. On Thursday, at least nine people were killed in scattered violence in Iraq , including the two Shiite workers who were gunned down in the Dora bakery.

Sectarian tensions have been running high in Iraq since the Feb. 22 bombing of a Shiite shrine in Samarra , 95 kilometers (60 miles) north of Baghdad , and the reprisal attacks against Sunni mosques and clerics that followed. The increasing sectarian violence also comes at a time of a political deadlock in Iraq .

There was an potential breakthrough Thursday when Prime Minister Ibrahim al-Jaafari cleared the way for Shiite leaders to withdraw his nomination for a second term, a step that could mark a solution in the monthslong effort to form a new Iraqi government. The Shiite alliance in Parliament that had nominated al-Jaafari for another term as prime minister lacks the support it would need from Sunni and Kurdish legislators who oppose him.

A seven-member committee of the Shiite alliance in the legislature was to meet Friday ahead of Saturday's parliament session to reconsider al-Jaafari's nomination and appeared likely to drop him for another candidate, reports the AP.