A fire broke out early Friday morning in the main building at Moscow State University , killing two people and injuring four, authorities said. The blaze, which broke out on the 12th floor of one of the five towers housing a dormitory, forced the evacuation of some 1,500 people, said Yevgeny Serebryannikov, deputy head of the Emergency Situations Ministry. Some had to cover their faces in wet towels to withstand the smoke. 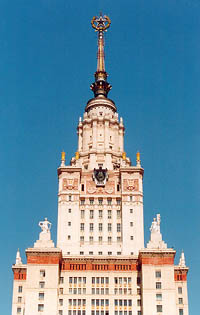 Russian and American citizens were among the residents of the wing, residents told state-controlled Channel One television, but no foreigners were among the dead and injured, the ITAR-Tass news agency reported. Prosecutors have opened an investigation on charges of violation of fire safety rules. ITAR-Tass cited dormitory residents as saying they believed a short-circuit had sparked the fire.

Separately, an early-morning fire in an apartment building in Khimki, a Moscow suburb, killed two people Friday, news agencies reported. Russia records about 18,000 fire deaths a year roughly 10 times the rate in the United States and 12.5 times higher than in Britain due in part to lax enforcement of regulations and shoddy construction, reports the AP.