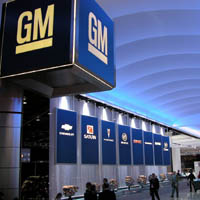 GM said revenues were up 14 percent to a record $52.2 billion (42.3 billion euros) from $45.8 billion a year ago, thanks in part to strong sales in Asia and Latin America and improvements in North America, including better pricing.

Included in the first-quarter results was a one-time pretax charge of $1 billion (820 million euros) in for expenses related to a recent settlement that requires hourly retirees to pay more for their health care. GM must contribute $3 billion to a fund for retiree health care by 2011.

GM's struggling North American division reported a loss of $946 million (766.24 million euros), compared with a loss of $1.5 billion a year ago. GM Chief Financial Officer Fritz Henderson said cost savings from the health care agreement and from employee buyouts will largely be seen after July 1, but the automaker is optimistic about its results, the AP says.

"It's a quarter of good, solid progress," he said. "Obviously, the job's not done."

GM's financial arm, General Motors Acceptance Corp., earned $605 million (490.04 million euros) for the quarter, down from $728 million a year ago because of lower mortgage earnings. GM recently completed an agreement to sell 51 percent of GMAC to an investor group for $14 billion (11.34 billion euros).