The 12-nation euro slipped slightly Thursday against the U.S. dollar, which had fallen the day before on speculation over interest rates. 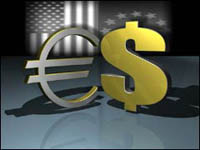 In a turbulent day of trading on Wednesday, the dollar bounced around as traders speculated about the likelihood of the U.S. Federal Reserve continuing its policy of measured interest rate increases.

Eventually, the U.S. currency ended the day down against most major currencies after a Fed official indicated a report showing an increase in inflation in March would not change the bank's outlook on credit tightening.

The Fed has raised short-term interest rates by a quarter percentage point 15 consecutive times since June 2004, which has helped to boost the dollar.

Higher interest rates make investments in some types of securities more attractive, pulling in international capital and boosting a currency, the AP says.

The markets are pricing in one more quarter-point increase at the Fed's next meeting on May 10, but are now expecting a pause in hikes after that.