For the past nine months, a small U.S. military team based here has courted reporters at Arabic-language news outlets clustered in Dubai , hatching a charm offensive aimed at reversing negative coverage of the United States . The success of their tiny operation has caught the eye of the U.S. State Department. Spokesman Adam Ereli said this week that an Arabic-speaking diplomat and staff will be sent to Dubai this fall to represent the United States on Arab TV programs. 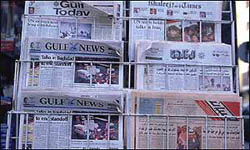 Ereli and other U.S. officials say the Arab news outlets have been ignored for too long, allowing radical Islamists to condemn American policy with little response. "We have, to our detriment, been defined by our critics," Ereli told The Associated Press by telephone from Washington . Dubai Media City , the target of the U.S. media outreach teams, is a sleek office park with palm-shaded cafes overlooking artificial lakes that has in five years become the Middle East 's largest journalism hub. The tax-free zone now counts more than 1,000 media-related companies, including bureaus for global and regional TV, radio and newspapers.

"We were essentially allowing al-Qaida and other terrorists to run rampant with lies and propaganda," said Army Capt. Eric Clark, one of two U.S. Central Command officers based here. "We're late in this fight. We're filling this huge vacuum that's existed in Arab countries for years." The Dubai initiative parallels other U.S. attempts to temper Arabs' opinions of America, including Arabic-language Radio Sawa and Al-Hurra satellite TV, funded and overseen by the State Department. Both operate bureaus here.

U.S. President George W. Bush has also named his adviser, Karen Hughes, as point person for improving the U.S. image among Muslims. Hughes, as undersecretary of state for public diplomacy, will oversee the Dubai media office. But for now, American media diplomacy here is dominated by the Pentagon.

Influencing Arab opinion is a component of the Pentagon's new "long war" strategy, which says that America 's conflict with Islamic extremists requires more diplomacy and less bombing. "We're working to change the mind-set in the Arab world that America is this monolithic evil," Clark said. "We're hoping to stop the ability of al-Qaida to recruit future members."

Media executives in Dubai say they appreciate Washington 's attention, but that positive spin will do little to change their coverage. U.S. foreign policy perceived as anti-Arab is the reason behind the negative coverage, they said. Nakhle Elhage, news director at influential Al-Arabiya TV, said the U.S. military has won more airtime since the Centcom team arrived.

But Elhage said the team has been unable to improve the network's bad relations with the U.S. military, which he blames for the deaths of three Al-Arabiya reporters in Iraq and the arrests of three others. Elhage said Clark and his senior officer, NavyCapt. Frank Pascual, were unable to help secure the release of a reporter jailed for four months in Iraq . Elhage spoke of his frustrations at a Centcom conference in January, where he said American delegates displayed little understanding of Arab views.

"They want one-way traffic," Elhage said. "They want to give their message, but they don't want to listen." Ereli said the Dubai officer would discuss America 's role in the Iraq and Israeli-Palestinian conflicts as well as human rights and AIDS. He said the office wanted to "shift the terms of debate" away from claims of "colonialism and exploitation" toward a more nuanced view of U.S. Mideast objectives.

Clark is not able to discuss much of what incenses the Arab world, especially U.S. support for Israel . "That's a State Department issue, a White House issue. As a soldier, I can't discuss U.S. policy toward Israel ," he said. The Centcom team was dispatched after exploratory visits in 2005 found that so many Arab-language media had moved to Dubai that a small team could have an outsized strategic effect.

"The pan-Arab media outlets in Dubai Media City were like a dry sponge," Clark said. "They didn't have access to U.S. military personnel for breaking stories." News operations with bureaus in Dubai include the BBC, AP, Reuters, Agence France Presse, CNBC and CNN, as well as Arabic networks Middle East Broadcasting Corp., Dubai TV and Abu Dhabi TV, and a plethora of Arabic-language and English regional newspapers.

Dubai also hosts an office of The Lincoln Group, the firm hired by the Pentagon to pay Iraqi newspapers to print articles favorable to the U.S. military. The Centcom team decided not to open an office in the compound and instead operate by using mobile phones and meeting in coffee shops and hotels. Both officers traded their military uniforms for business suits.

Clark says he's been able to make headway with news outlets seen as hostile. Stormy relations with the Arab satellite TV network Al-Jazeera, which has offices in Dubai but is based in nearby Qatar , are on the mend, Pascual believes. "Al-Jazeera has gotten better," Pascual said. "They call us now. I think we've made great progress."

When the Pentagon gets angered by coverage like Al-Jazeera's airing a clip of sobbing American hostage Jill Carroll in Iraq the Dubai team adopts another role: telling Arab news executives they've gone too far. "It's not a bad thing for journalists to feel a bit of push-back now and then," Pascual said, reports the AP.