Jackie Chan and other stars met behind closed doors at a Hong Kong hotel Wednesday to discuss ways to better protect their privacy against the territory's aggressive paparazzi. 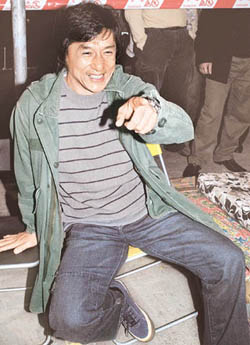 Chan didn't comment to reporters immediately after the meeting but the stars released a statement demanding better laws regulating the photographing of individuals in their homes. The stars said they believe in freedom of press, but that it shouldn't include voyeurism.

"We think there's a distinction between 'public interest' and 'what the public is interested to know,"' the stars said in their statement. Hong Kong has a vibrant press and an equally active entertainment industry. The result: Pop stars and celebrities are intensely scrutinized by the media. Sending reporters abroad to tail big stars is common practice.

The stars said Hong Kong journalists have become increasingly disrespectful of privacy, alleging that they engaged in dangerous car chases, assumed false identities to enter private places and even bribed morgue workers so they can take pictures of dead bodies.

"What you wear or who you are with or how much your meal costs have nothing to do with the public interest," actor Anthony Wong said as he left Wednesday's meeting. Veteran singer Alan Tam said the stars studied local laws and examples of invasion of privacy in other countries.

"When new laws are passed, maybe we can sleep well and don't have to shower or go to the bathroom in the dark. It could make a big difference," Tam said. Other stars attending the meeting included actors Tony Leung Ka-fai, Simon Yam and singers Andy Hui and Jordan Chan, reports the AP.