Nepal 's royal government imposed a daylong curfew Wednesday and gave security forces orders to shoot violators on sight in a western town where thousands of pro-democracy protesters clashed with police a day earlier. Meanwhile, a woman hit by a tear gas shell fired by police to disperse demonstrators in the southwestern town of Nepalgunj has died, becoming the sixth person to be killed by security forces during two weeks of violent protests against King Gyanendra's rule. 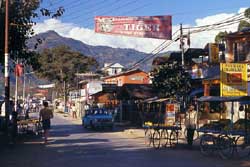 The curfew was imposed in the city of Pokhara , about 200 kilometers (125 miles) west of Katmandu , a day after police fired rubber bullets and tear gas in a clash with thousands of protesters, injuring at least a dozen people. State-run Radio Nepal said anyone violating Wednesday's order to stay off the streets of Pokhara a town popular with foreign and local tourists would be shot.

Police arrested 250 college and university professors who defied the curfew order and took to the streets in Pokhara. Krishna Adhikari, a professor who was among those arrested, said the academics had conducted a peaceful rally when police suddenly stopped them, loaded them up in police trucks and drove them to detention centers. "We condemn the police breaking our peaceful rally," Adhikari said speaking on his cellular phone.

Police did not open fire on the professors even though security forces were given orders to shoot violators of the 8 a.m.- 7 p.m curfew on sight. The woman killed in Nepalgunj was among thousands of protesters who on Tuesday stormed a monument being built for King Gyanendra in the town's main square, which had been named after the monarch.

She died in a hospital later that evening, said Binod Adhikari, the chief government administrator in the area. Adhikari said the security forces were compelled to use some force to bring the situation under control at Nepalgunj, which is about 500 kilometers (310 miles) southwest of the capital, Katmandu .

Two policemen were also critically hurt in the clash. He said there were fresh protests on Wednesday to protest the death of the woman. The violence comes amid a general strike called by Nepal 's opposition political parties aiming to oust King Gyanendra, who seized power last year after sacking an interim government. The United States , meanwhile, again urged Gyanendra to restore democracy with White House press secretary Scott McClellan saying in Washington that the unrest in the country "will only worsen."

"Arrests and violence accompanying the pro-democracy demonstrations only add to the insecurity and compound the serious problem facing Nepal ," he told reporters. Nepal 's royal government on Tuesday summoned U.S. Ambassador James Moriarty to protest the envoy's remarks that if Gyanendra did not compromise with his opponents he could end up clinging to the rails of a helicopter as he fled the country.

The strike has forced shops to close and vehicles to stay off the streets for 14 straight days in this Himalayan kingdom, causing shortages of food and other necessities in Katmandu . Drivers on Wednesday lined up at gas stations in the city and shoppers searched for cooking gas after armored military vehicles escorted a convoy carrying the capital's first supplies since the unrest began.

Twenty-three trucks and buses on Tuesday brought in badly needed salt, bananas, potatoes and onions, as well as kerosene and gasoline. In a sign that government workers have also begun to publicly defy the king, 25 Home Ministry employees walked out of work chanting anti-king slogans on Tuesday. All were arrested along with three journalists covering the protest, an official said on condition of anonymity due to fears of retribution.

Gyanendra seized direct power last year, arguing the move was needed to restore political order and crush a Maoist insurgency that has left nearly 13,000 people dead. The opposition's campaign, which began April 6, is the worst unrest since Gyanendra's power grab, with increasing numbers of Nepal 's 27 million people frustrated by the intensifying insurgency and faltering economy. The royal government has responded harshly. Police have beaten, tear gassed and arrested thousands of protesters, reports the AP.