Russia and China to oppose sanctions against Sudanese blocking peace

In a blow to Britain and the United States , Russia and China blocked proposed sanctions against four Sudanese accused of interfering with peace efforts and violating human rights in conflict-wracked Darfur . The sanctions would have been the first imposed by the U.N. Security Council since it adopted a resolution in March 2005 authorizing an asset freeze and travel ban on individuals who defy peace efforts, violate international human rights law, or are responsible for military overflights in Darfur . 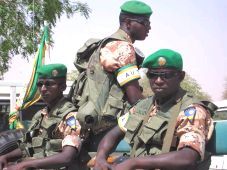 Russia and China to oppose sanctions against Sudanese blocking peace

A U.N. panel that investigated the Darfur conflict recommended last year that 51 people be prosecuted for war crimes, including senior government officials. But the four names, proposed by Britain and strongly backed by the United States , were the first to be formally circulated for approval by the Security Council sanctions committee on Sudan .

Russia 's U.N. Ambassador Andrey Denisov and China 's U.N. Ambassador Wang Guangya objected Monday, saying sanctions could hamper serious negotiations in Abuja , Nigeria , to end the three-year conflict in Darfur which has left about 180,000 dead most from disease and hunger and displaced another 2 million from their homes. The African Union set April 30 as the deadline for a peace agreement and the Security Council has endorsed that target date. The Russians and Chinese want to wait for the outcome of the Abuja talks, which are being mediated by the African Union.

But U.S. Ambassador John Bolton said the United States saw no reason for a delay and was prepared to take the issue out of the sanctions committee and circulate a draft resolution that would name the four Sudanese and impose sanctions against them. If that resolution was put to a vote, Russia or China would be forced to use their veto power to block it.

Council diplomats, speaking on condition of anonymity because the list has not been released, said the four names proposed for sanctions include one member of the Sudanese government, two rebel figures, and one member of the government-backed Janjaweed militia. Bolton asked for a Security Council meeting late Monday to discuss the sanctions issue. But China 's U.N. Ambassador Wang Guangya scheduled closed consultations Tuesday morning, ahead of an open briefing in the afternoon by Salim Salim, the African Union's Darfur mediator.

"We have to see what is the best course of action that the council can take to help Salim," Wang said. Russia 's Denisov said the African Union asked the Security Council and the international community "to be constructive dealing with Sudanese issues because ... by April 30 we expect some outcomes of the Abuja talks."

"The whole situation, the whole political process in Sudan is also very fragile," Denisov said. "Let's wait, at least until the end of April, and then come back to the issue having the results positive or maybe not positive of these Abuja talks." He said the council should follow the doctors' Hippocratic Oath of first doing no harm, in this case, "to that very fragile process in Sudan ."

" China believes that this is not the right moment since the Abuja negotiations are under way and we expect progress on that," Wang said. "At this sensitive moment, to publish this list will have a negative effect on the negotiations there." Decades of low-level tribal clashes over land and water in the Darfur region erupted into large-scale violence in early 2003 when ethnic African tribes took up arms, accusing the Arab-dominated central government of neglect. The government is accused of responding by unleashing Arab tribal militias known as Janjaweed to murder and rape civilians and lay waste to villages a charge it denies, reports the AP.