Burundi 's government lifted a midnight to dawn curfew Friday for the first time since 1993, saying that most of the country is stable after years of civil war. "The government estimates that security has improved, there is no more reason to maintain the curfew," said Philippe Nzobonariba, the secretary of state. 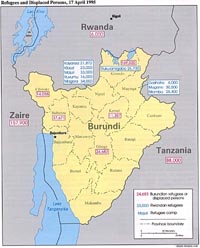 The curfew was first imposed following the assassination of the country's first democratically elected president in 1993. He was a Hutu and was slain by Tutsi paratroopers, setting off a civil war that left more than 250,000 people dead. A cease-fire was reached between the Tutsi-controlled government and the main Hutu rebel group in 2003 and rebel leader Peter Nkurunziza was elected president in August.

But one rebel group continues to fight, though in only one of Burundi 's 17 provinces rural Bujumbura . Provincial officials will have the option of maintaining a curfew there. Nkurunziza recently announced a new push to reach a peace deal with the Force for National Liberation led by Agathon Rwasa. Most residents of the capital, Bujumbura , welcomed the decision.

"If the curfew is lifted it will show that life has become normal and foreigners will trust us again," resident Freddy Nkurunziza said. But university student Tony Manirakiza said he feared banditry could increase. "There are a lot of armed bandits now. Some police were, in some cases, revealed to commit crimes like theft and raping. I am afraid crimes will grow in number," Manirakiza said, reports the AP.