A prominent Belarusian opposition leader was freed from prison Friday after nearly two years in custody. Mikhail Marinich, 66, the former foreign economic relations minister, was released following a court decision earlier this week that approved a request for his early release. 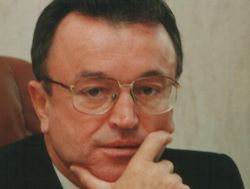 Marinich, who suffered a stroke in prison and is officially considered an invalid, was arrested in April 2004 and later convicted of theft in a case widely dismissed as fabricated. He was sentenced to five years in prison, but later had the sentence shortened to 2 Ѕ years.

Marinich told The Associated Press in a telephone interview after his release that he was feeling fine, but his son, Igor, said he was concerned about his father, who looked frail.

The same central district court in the Belarusian capital that sanctioned Marinich's release has refused a request to free another opposition leader, Alexander Kozulin, who was jailed during protests over the disputed re-election of authoritarian President Alexander Lukashenko last month.

Kozulin was detained six days after the March 19 election as he led a protest march that was broken up by riot police, who beat demonstrators with truncheons. Kozulin, whose wife says he was among those beaten, considers his arrest politically motivated and illegal.

Western nations have imposed travel sanctions on Belarusian officials over what they called a deeply undemocratic election and have called for the release of Kozulin, one of two opposition candidates who ran against Lukashenko. According to official figures, Lukashenko won a third term with 83 percent of the vote, although the opposition claims the vote was rigged. Lukashenko has ruled the nation of 10 million since 1994, quashing dissent and extending his time in office through votes widely considered illegitimate, reports the AP.