Norwegian Princess Martha Louise does not wear a crown on her head, live in a castle or have blonde hair long enough to climb. 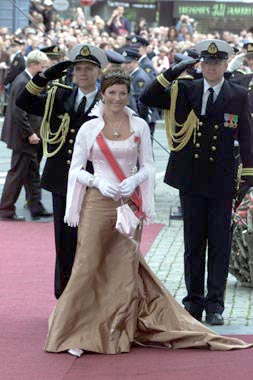 But that did not matter to a group of rapt American school children who sat cross-legged at her feet Thursday as she gave a lively reading of her illustrated book, "Why Kings and Queens Don't Wear Crowns."

A crowd of about 300 children, parents, grandparents and college students attended the storytelling and book-signing event at St. Olaf College, a school with Norwegian roots. The event is part of a 28-city U.S. book tour.

Her fairy tale, part fiction, part fact, is based on the childhood of her grandfather King Olav V, who moved to Norway from Denmark when he was 2. Olav's parents, originally Danish royalty, became the king and queen of Norway in 1905 after Sweden and Norway peacefully broke apart.

The book, written in a folksy style, spins a yarn about the family's adjustment to Norwegian life, in particular young Olav's time spent learning to ski, sled and make snowmen.

"I've grown up with pictures of my grandfather skiing and sledding when he was small," she said. "(The book) is just my imaginary way of how they tried to acclimate to the Norwegian way of living."

She said the book was inspired by memories of fulfilling her official duties. She said parents would bring their children to see her, and the kids did not believe she was a princess.

"All the children, they wouldn't be fooled. They'd say, 'No, that's not the princess because she's not wearing a crown,' and they'd be so disappointed," she said.

So she decided to write a story explaining the difference between royalty of the past and of the present. In the past they wore crowns on their heads, she said, but now they wear crowns in their hearts.

The princess' book has reached best seller status in Norway, where 30,000 copies have been sold. An English version of the book has sold about 15,000 copies in the United States.

Critics have accused the princess of exploiting her royal title to sell books, but she disagrees. "I think the main thing is I don't get money from the state. I have to earn money," she said. "And writing is very close to me."

Leif Hagen, a 39-year-old St. Olaf alumnus, attended the book-signing with his wife, Anne, 36, and three young daughters. Hagen said he enjoyed the energetic explanation of the pictures from book illustrator Svein Nyhus, reports the AP.