"The Great American Boycott" is spreading south of the border, as activists call for Mexicans to boycott U.S. businesses on May 1. The protest is timed to coincide with a May 1 boycott of work and shopping in the United States that also has been dubbed "A Day Without Immigrants." The boycott, which grew out of huge pro-migrant marches across the United States , is designed to pressure Congress to legalize millions of undocumented people. 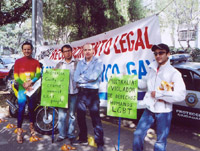 Mexican unions, political and community groups, newspaper columnists and even some Mexican government offices have joined the call in recent days. "Remember, nothing gringo on May 1," advises one of the many e-mails being circulated among Internet users in Mexico .

"On May 1, people shouldn't buy anything from the interminable list of American businesses in Mexico ," reads another. "That means no Dunkin' Donuts, no McDonald's, Burger King, Starbucks, Sears, Krispy Kreme or Wal-Mart." For some it's a way to express anti-U.S. sentiment, while others see it as part of a cross-border, Mexican-power lobby.

In some cases, advocates incorrectly identified firms as American Sears stores in Mexico , for example, have been owned by Mexican billionaire Carlos Slim since 1997. And ironically, the protest targets the U.S. business community, which is one of the strongest supporters of legalization or guest-worker programs.

"At the end of the day, boycotting would only hurt corporations that are backing what people want done in the immigration bill," said Larry Rubin, CEO of the American Chamber of Commerce in Mexico . Rubin is encouraging people to write to their legislators instead of boycotting. Roberto Vigil of the California-based immigrants rights group Hermandad Mexicana said his group has asked some of Mexico 's largest labor unions to back the protest. Elias Bermudez, president of the Phoenix-based Immigrants Without Borders, is actively promoting the boycott in interviews with Mexican radio and television stations.

Mexican groups are responding. Pablo Gonzalez, spokesman for one of Mexico's largest labor unions, the Federation of Revolutionary Workers and Farmers, said his organization will support a boycott against "at least four of the most important U.S. firms, among them Wal-Mart," Mexico's largest retailer.

Two other major labor groups the telephone workers' and auto workers' unions also are expected to join, Vigil said. Even parts of the Mexican government have signed onto the protest. "We are not going to be buying any products from the United States on May 1," said Lolita Parkinson, national coordinator for the National Board of State Offices on Attention for Migrants, which represents state government-run migrant aid offices.

For some, the boycott is fueled not just by debate on the immigration bill, but by long-standing resentment over the perceived mistreatment of Mexicans in the United States . "We want to show the power we have as Mexicans," said Carlos Chavez y Pacho, vice president of the chamber of commerce in Piedras Negras, across from Eagle Pass , Texas . Chavez y Pacho is also urging Mexicans not to shop in U.S. border cities on May 1, in part to protest what he calls arrogant behavior by U.S. customs officials and border officers.

Rafael Ruiz Harrell, who writes a column in the Mexico City newspaper Metro, predicted the boycott could give rise to a broader, pan-Latino movement. "If we could get all of Latin America , for one day, to leave the U.S. firms without customers, we would be sending the kind of clear message they seem incapable of understanding," he wrote, reports the AP.