China wants to talk about Taiwan with Washington

Chinese President Hu Jintao wants to talk about Taiwan when he meets U.S. President George W. Bush but also is willing to take up trade and currency disputes, China 's Foreign Ministry said Friday. Bush says he hopes Hu will discuss China 's soaring trade surplus with the United States and disputes over its currency. China wants to hear a firmer stance from Washington over Taiwan , the self-ruled island that Beijing claims as its own territory. 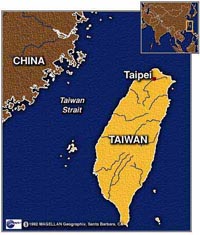 China wants to talk about Taiwan with Washington

"The Taiwan question is the most important and the most sensitive core issue in the China-U.S. relationship," said Yang Jiechi, a deputy foreign minister. "Leaders of the two countries will most naturally talk about the Taiwan question." Bush is under pressure to get China to take action to reduce its trade surplus with the United States , which hit a record US$202 billion (166 billion) last year.

But Beijing says Taiwan is the more pressing issue. The island split with the mainland in 1949. Beijing regularly threatens to attack if Taipei moves toward trying to make its de facto independence permanent. The United States has no official ties with Taiwan but is the island's main arms supplier and could be drawn into any conflict.

Washington says it wants China and Taiwan to maintain the current status quo and has been mildly critical of Taiwanese moves that appear to nudge the island closer to formal independence. "We hope the U.S. will in real earnest honor its commitments and send no wrong signals to the secessionist forces for so-called Taiwan independence forces, and we hope the U.S. will join hands with China to oppose and counter secessionist activities for Taiwan independence," Yang said.

Yang said Hu was ready to discuss disputes over China 's currency but wouldn't give any details of what he might say. Washington says the currency is undervalued by up to 40 percent, giving Chinese exporters an unfair price advantage.

"We stand ready to hold exchanges with other countries on the question of the exchange rate," Yang said. China says its currency reform is being modulated to maintain domestic and international economic stability. "The Chinese side attaches great importance to the concerns of the U.S. side regarding the imbalance in two-way trade," Yang said.

He noted that a delegation of more than 200 Chinese business executives traveling in the United States this month had signed or was prepared to sign deals with American companies worth some US$16.2 billion (13.3 billion), reports the AP.