Secretary of State Condoleezza Rice called on Congress Wednesday to approve an unprecedented U.S. plan to share nuclear technology with India, saying it was "not enabling a larger weapons program." 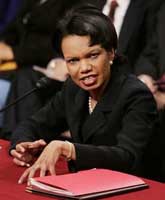 Civilian reactors in India would come under international inspection and India's energy needs would get a boost, Rice said.

But India's work on nuclear weapons would not be constricted, and Rice's testimony was received with considerable skepticism. "I fear this deal could make this world less safe, not more safe," Sen. Russell Feingold, a Democrat, said.

Expressing concern, Barack Obama, a Democrat, noted that eight of India's 22 nuclear plants would be off-limits to U.N. inspectors "and they will be producing large amounts of unclear material", reports AP.

According to DailyIndia, Senator Lugar, Mr. Chairman, members of the Committee. Thank you very much for this opportunity to come and discuss with you this indeed path-breaking US-India civil nuclear cooperation agreement and it obviously deserves the support of the US Senate, but we also understand that it deserves the thorough review of the Senate before giving that support.

So that is why I'm here and I want to note that we are prepared to continue our discussions and our briefings to the point that you feel that you have the information that you need to make this determination. Let me note that I have longer - a fuller testimony that I would like to have entered into the record.

India's society is open and free. It is transparent and stable. It is multiethnic. It is a multi-religious democracy that is characterized by individual freedom and the rule of law. It is a country with which we share common values.

India will soon be the world's most populous nation and America's exports to India have doubled in only the past four years. And of course, India is a rising global power that we believe can be a pillar of stability in a rapidly changing Asia. In other words, in short, India is a natural partner for the United States.

U.S. President George W. Bush has urged the Congress approve the controversial nuclear deal he signed with India during his trip to the country early March.

However, the deal has been strongly opposed by the U.S. Congress who argued that India did not sign the Nonproliferation Treaty and the move could embolden other countries to try to acquire nuclear technology, informs Xinhua.