The Dutch Foreign Ministry said Wednesday it was trying to arrange a high-level visit in July to Venezuela , the president of which has embroiled the Netherlands in his continuing rivalry with the United States . Foreign Minister Ben Bot had hoped to visit Caracas to see President Hugo Chavez earlier this month after accompanying Queen Beatrix on a state visit to Argentina , but the scheduling could not be worked out, said Bot's spokesman Herman van Gelderen. 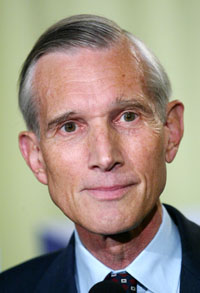 The two countries were now in contact about a July visit, he said. Bot told the Dutch parliament on Tuesday there was no diplomatic crisis with Venezuela , despite a harsh exchange of words between Chavez and Defense Minister Henk Kamp. Chavez had called Kamp "a pawn of Washington " and a "truly ridiculous man" who was being manipulated by the United States .

The spat began when Chavez suggested the islands of the Netherlands Antilles , off Venezuela 's coast, could be used as a staging ground for U.S. military action against Venezuela . Some hawkish Dutch politicians warned that Chavez' words could have been a veiled threat against the islands. Kamp said during a parliament debate that Chavez was looking "with big eyes" at the Caribbean .

On Monday, Chavez dismissed suggestions that Venezuela had territorial designs on the islands, and accused the United States of spreading rumors. The Dutch said they were satisfied by Chavez's response and that Venezuela had no intention of invading the Dutch island territories, reports the AP.