Water washed through a protective barrier on a dam in Lower Austria province early Wednesday, causing the evacuation of some local residents, an official said. The incident, which happened overnight, occurred in the town of Stillfried , about 40 kilometers (25 miles) northeast of Vienna , Joerg Wuerzelberger, spokesman for the Lower Austrian Command, told the Austria Press Agency. Another protective barrier has been built, and the overnight evacuations occurred for security reasons, he said. 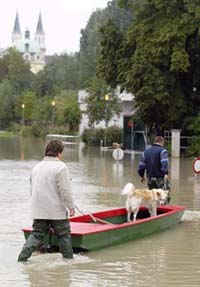 The overnight incident exacerbates an already tense situation. Already on Tuesday floodwaters burst through a dam in the town. Hundreds of firefighters and army troops worked feverishly to patch up the breach using sandbags and bags filled with heavy stones. Rescue teams also worked feverishly overnight and Wednesday to contain water in the town of Duernkrut , a village where another dam over the swollen March River partially gave way Monday, forcing the evacuation of some residents.

The situation in the entire region remains critical, Austrian radio reported, citing local officials. Over the past few days, some 600 houses have been flooded and about 1,200 people have been evacuated. Two seniors who ventured out onto the bloated March River in a row boat are still at large, the radio reported. Authorities, on alert since Tuesday, have located the vessel but found no signs of the individuals.

In an attempt to stabilize the dams, 500 army troops, 750 firefighters and six Blackhawk helicopters were in the region. With more rain in the forecast, authorities are pessimistic about a rapid retreat of the water, reports the AP.