Ten people were killed and more than 40 others injured in two road accidents on the same highway in northern Syria , the official Syrian Arab News Agency reported Wednesday. Both accidents occurred on Tuesday night, when it was raining, on the main road between the capital Damascus and Homs , 160 kilometers (100 miles) to the northwest. 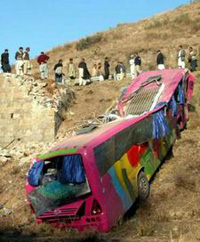 In the one case, two speeding cars collided, and other vehicles crashed into them. But nobody was killed until a truck smashed into the pileup, killing seven people and seriously wounding four others, said Mohammed al-Kassem, the deputy head of Syria 's Society for the Prevention of Road Accidents. In the second accident, a public bus overturned, killing three people and injuring 40 others, SANA reported. The agency said the bus had been speeding, reports the AP.