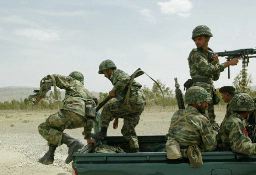 "There is an exchange of fire going on" in Shawal, a rugged, forested area about 15 kilometers (9 miles) from the Afghan border, he said. The fighting that follows a spree of bloody clashes between pro-Taliban tribesmen and Pakistani troops in recent weeks erupted after an overnight rocket attack on a military base in Mana, a village about 50 kilometers (30 miles) west of the main town of Miran Shah, that left at least two soldiers dead. Two other troops were killed in fighting on Wednesday.

Helicopter gunships backed ground troops that have surrounded at least four compounds where militants are believed to be hiding, Sultan said. He refused to identify the militants who surrendered or give their nationalities. Military officials have said Arab, Central Asian and Afghan fighters are present in the region, but local tribesmen are showing increasing resistance to the government in the lawless region. Last month, the army reported that scores of foreign and local militants were killed in fighting with security forces.

Militants also fired seven rockets at a military post at Tata Khel, a village located on the edge of Miran Shah, that injured two soldiers late Tuesday, a security official said on condition of anonymity because he was not authorized to speak to media. Pakistan , a key U.S. ally in the war on terror, has deployed about 80,000 troops in its tribal regions near Afghanistan in an effort to flush out al-Qaida and Taliban militants.

The latest clashes came as Pakistan 's Prime Minister Shaukat Aziz visited the United States and U.S. Assistant Secretary of State for South and Central Asia Richard Boucher made his first visit to Pakistan . Asked to comment on a perception that Pakistan often launches crackdowns against militants when a senior U.S. official is visiting here or a Pakistani leader travels to the United States, Sultan said: "Did we ask them to attack (the troops) last night", reports the AP.