Saddam appears in court for questioning

Ousted Iraqi leader Saddam Hussein appeared in court Wednesday for questioning by judges and prosecutors in a new session of his trial on charges of killings of Shiites in the 1980s. Saddam, who is being cross-examined for the first time in court, was the sole defendant in the courtroom as Wednesday's session opened. His seven co-defendants testified one by one in earlier sessions over their role in a crackdown against Shiites in the town of Dujail launched in 1982. 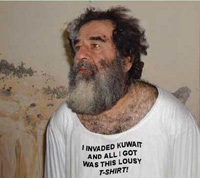 Saddam appears in court for questioning

The session came a day after prosecutors indicted Saddam on separate charges of genocide, accusing him of trying to exterminate Kurds in a 1980s campaign that killed an estimated 100,000 people. The charges will be dealt with in a separate trial. Saddam had been due to testify and be questioned in the last session of the Dujail trial, on March 15.

But he launched into a long speech calling on Iraqis to stop secular violence and unite to fight American troops. After arguing with Saddam and demanding he stop making political speeched Chief judge Raouf Abdel-Rahman closed most of the session to the public to allow Saddam to finish his speech.

Wednesday's cross-examination was the judges and prosecutors' first opportunity in the six-month-old trial to directly question Saddam over allegations he directed a crackdown against Dujail residents in which 140 Shiites were killed and hundreds were imprisoned, some of them undergoing torture. Saddam has acknowledged ordering the trial in which the 140 Shiites were sentenced to death but has maintained his actions were legal because they were in response to a 1982 assassination attempt against him in Dujail.

In court Wednesday, Saddam demanded an international body examine signatures alleged to be his on documents the prosecution has presented concerning the crackdown, including an order approving the death sentences. Some of Saddam's co-defendants have insisted signatures said to be theirs are forged. "You should resort to an impartial, international body" and not a body "that kills thousands people on the streets and tortures them ...the Interior Ministry," Saddam told Abdel-Raouf, referring to the now Shiite-controlled ministry, which some Iraqis accuse of backing Shiite militias that have assassinated Sunni Arabs.

"Don't venture into political matters," Abdel-Raouf replied. "If you are scared of the Interior minister, he doesn't scare my dog," Saddam retorted. Saddam and the seven former members of his regime face possible execution by hanging if they are convicted in connection with the crackdown launched in Dujail following a July 8, 1982 shooting attack on Saddam's motorcade in the town, reports the AP.